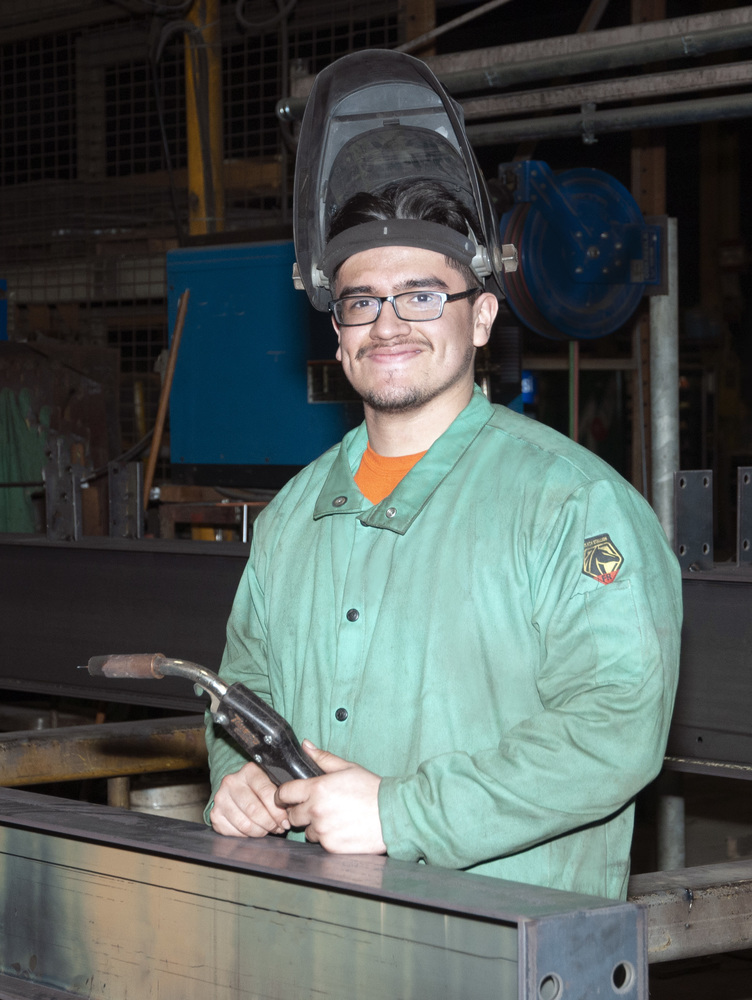 For Columbus Public Schools, “discover” isn’t just a part of its mascot.  It’s a highlight of its curriculum. Regardless of the area, students are encouraged to discover their passions, interests and develop their skills. And for those Columbus High School students in the Behlen apprenticeship, their future.  Jefferey Soto, who was the first student to graduate from the apprenticeship and hired full-time after completion, did just that. “It helps you choose what you want to do in your future and helps you pick the best college for you if you are interested in manufacturing,” he said. “Behlen has helped me find what to do in my future.”

Behlen Chairman and CEO Phil Raimondo emphasized just that.“The key is finding out what they enjoy,” Raimondo said. “They get exposures to manufacturing, welding, CNC (computer numerical control) and with those opportunities get to make a choice if it’s for them.”  Having his own internships in the ’80s, Raimondo knows first-hand that experience is important. But he sees the apprenticeship as a step further.  “They are more formal and recognized for the experiences they provide. There are the OSHA (Occupational Safety and Health Administration) classes and the training.”

Behlen’s talent development manager Tyler Bertsch said that critical step, exposure, is important to youth regardless of program.  “I wanted to be a teacher and I was so happy to get out there and see if it was for me,” he said. “It didn’t turn out, but a lot of kids don’t get to know until they’re in a couple of years.”  For students who may not be aware of the field, the apprenticeships and offer a discovery of the field itself. Manufacturing has evolved, Bertsch said. It’s likely not what it looked like just 10 years ago.

“Our industry, manufacturing as a whole, is opening its doors to kids so they can actually see what it is. It’s not the same as it used to be decades ago,” he said. “It’s becoming much more advanced, especially with the set of robotics. It’s not a hammer at the end of the line.”  Chase Paczosa, a junior, is one of six students currently in the program. Paczosa is excited to get to use some of the latest technology available. “They have some real fancy welders there,” he said. “There are two types of wire welders, they’re new. It’s pretty exciting.”  Technology may have changed but certain skills haven’t.  “Those soft-skills: responsibility, respect,” Bertsch said. “Those are valuable, not only here but with any job, they will have.”

Paczosa said Behlen has a high standard for anyone on the floor.  “You’re expected to work while you’re there. Pretty quick they expect you to keep up and meet their numbers. It’s exactly the same as any other employee,” he said.  Soto agreed but said Behlen was flexible with scheduling, allowing him to keep up with homework. “(The only difference), being apprentice they cut some slack with me because I was still in school,” he said of being able to adjust his schedule. “Being full time is having 100 percent responsibility. As a full-time worker, you have to do your 40 hour week, which I don't mind personally. I love working here.”

Student apprentices, as with any inexperienced hire, go through training stages before migrating into different parts of the Behlen’s departments.  “A lot of what you are doing you have to learn by doing,” Paczosa said. “We have to do so many hours of training, so much of the same thing before we’re ready to move on.”  Paczosa said he began as an apprentice welder and has worked in gates and implements. That is by design. “It’s an all-encompassing role,” Bertsch said. “It’s trying, wherever the need is out in the shop, or in the office, trying to bridge that (need.)”

CPS Career Coordinator Stephanie Carlson said the Behlen apprenticeship starts in the classroom first.  “We work with the kids to get the STS (skills and technical science) course they’ll need on the job,” she said.  “There is an entry-level class they have to take, it kind of like a gatekeeping type class called Linkages,” Bertsch added. “A lot of the content in those courses pertain to what we do out here.”

Paczosa and Soto both acquired skills in their CHS classes that are used inside Behlen.“I'd say that I did use all the skills I learned from Linkages, manufacturing processes, and welding and applied it at work,” Soto said. “In (Department 9) they really test your skill set from measuring, blueprint reading, welding, and cutting … all skill sets that I applied from CHS to Behlen.”

Partnerships extend beyond just curriculum and skills, Bertsch said. Behlen will provide material for those CHS classes.  “We really appreciate the support from CHS, CPS and Columbus. They provide top of the line things for us,” Carlson said. “If we need a piece of material or something extra, (Behlen) can get us what we need. It’s amazing, really.”  Bertsch said supporting the program like this, helps Behlen long term.  “The skills needed to run those types of jobs are increasing and with that increases the skill set and it’s more difficult to find them,” he said.

Skills can be learned. To become an apprentice, it takes a special student.  “It takes a certain student, they have to have that drive,” Carlson said. “If they have that, we can make their schedules work.”

That’s exactly what the CEO expects.  “We want to find motivated kids that can grow, and learn and do good things apart of the program,” Raimondo said. “We’re excited about what the future brings.”